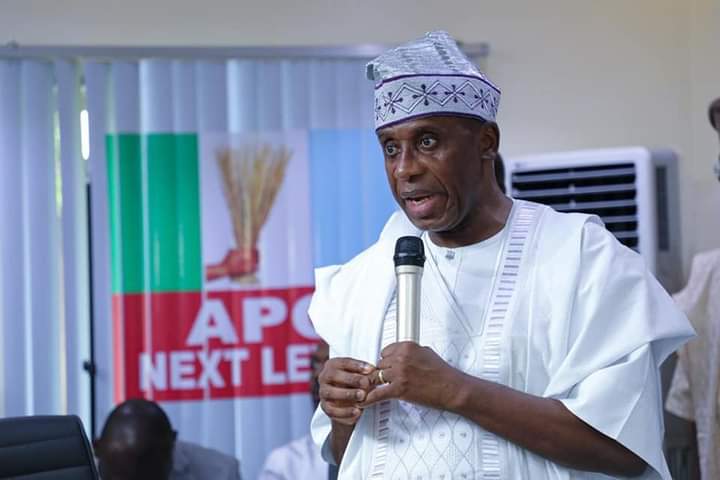 There was mild confusion among the delegates as the governor described Amaechi as President Muhammadu Buhari’s loyalist and confidant.

Presenting the Transport minister to the delegates, Governor El-Rufai, who described Amaechi as his own friend and confidant of President Buhari, said the minister won Buhari’s heart in 2011 when as a PDP governor of Rivers State, he funded the convention of Buhari’s Congress for Progressive Change (CPC)

Reminding the delegates of their endorsement of Tinubu, El-Rufai said: “Many people contesting election always say delegates will hardly make heaven, because they don’t keep to promise. But I always say Kaduna delegates are different.”

The governor, as he did during Tinubu’s visit, however, asked the delegates what their answer to Amaechi would be. But unlike the thunderous declaration of support for Tinubu, the delegates murmured.

El-Rufai said: “Asiwaju Bola Ahmed Tinubu was here two days ago and you promised him support. Today, here is my friend, my confidant, what are you going to say?

“Many people contesting election always say delegates will hardly make heaven, because they don’t keep to promise. But I always say Kaduna delegates are different. You were in a hurry and didn’t listen to what others aspirants will tell you. Amaechi is here and I told you that the Vice-President, Prof. Yemi Osinbajo, is also coming after him. Governor Kayode Fayemi is also coming. Also, my big brother who took CPC, Pastor Tunde Bakare, is also coming. As a result of that, you should be prepared and know what to tell them.

“Let me tell you people something. In 2011 when we were in CPC, we were to go to convention and we didn’t have money. Amaechi then was governor of Rivers State under the PDP. I don’t know how he got to know, then he asked how much was needed to hold the convention, and he gave the money. It was the money we used for the 2011 convention.

“Since then, President Buhari asked me to continue talking to him. When they were meeting, thinking of defecting to APC, we used to meet with the seven governors before two chickened out. Amaechi turned his back against his own neighbour, Goodluck Jonathan and said he was going to follow Buhari. He held on to that trust. That was why Daura Emirate gave him that title of Dan Amanan Daura.

“We are followers of Buhari. It is what he tells us that we do. So, here is my friend and Buhari’s loyalist, what are you going to do? You should know, after today’s discussion, there are going to be discussions.

“Others will come too, but who is your friend? Who is your loyalist?

“There was a time when I was in the opposition, the DSS were looking for me, they wanted to arrest me. Amaechi told me where to go and wait for him. I waited and he drove me to the DSS himself and he insisted that I should be questioned and released to him the same day and that was what happened. So, who is my friend? Who is my confidant?

“Now, I am going to ask you people two questions, one you can answer, the other you can choose not to answer. Have we agreed that it is justice that the presidency should go back to the South?”

Amaechi said he was one of the youngest of all the presidential aspirants in his party, the APC, adding that “our elders should go home and rest.”

He said, he governed a state that was ravaged at the time with insecurity, but was able to successfully tame the situation and expressed confidence that if elected as president, he would do same in Nigeria.

“I will continue with President Buhari’s agricultural transformation to address hunger,’ Amaechi said, adding that the administration of President Buhari inherited poverty, but had been able to change the situation positively.

“You need to vote for a candidate that will protect and provide for all, regardless of region, religion and tribe. This is what I am promising you.”

“As Speaker of Rivers State House of Assembly, I was elected Chairman of Nigerian Speakers twice and as Governor, I was also elected Chairman, Nigeria Governors Forum twice. It shows I have what it takes to govern. I am asking you not to waste Kaduna votes. Please give me your votes and I will come back to Kaduna to thank you,” Amaechi said.

Is Jonathan a Beautiful Bride? — By Ray Ekpu

I will restructure Nigeria if elected president --- Atiku