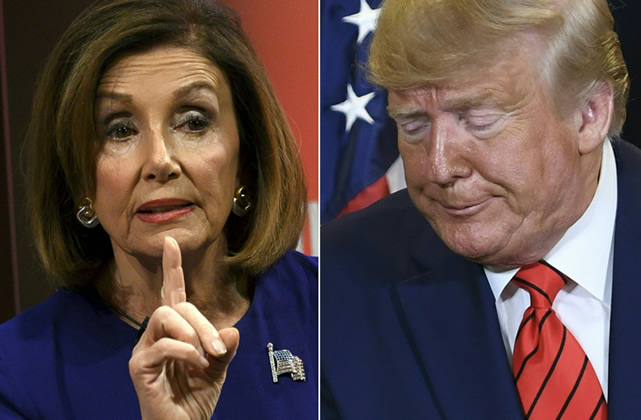 The top Democrats in Congress called on Thursday for President Trump’s immediate removal from office for his role in urging on the violent mob that overtook the Capitol a day before, disrupting the ratification of President-elect Joseph R. Biden Jr.’s electoral victory.

Speaker Nancy Pelosi of California and Senator Chuck Schumer of New York called on Vice President Mike Pence to invoke the 25th Amendment, which allows him and the cabinet to wrest the power of the presidency from Mr. Trump.

If Mr. Pence declines to act, they said, Democrats were prepared to impeach Mr. Trump for a second time.

“While it’s only 13 days left, any day can be a horror show for America,” Ms. Pelosi said, calling Mr. Trump’s actions on Wednesday a “seditious act.”

The speaker’s plan was announced during an extraordinary news conference in the reclaimed Capitol, hours after the building was overrun by a mob of Trump supporters who temporarily halted Congress’s confirmation of Mr. Biden’s victory in the presidential election. Speaking to reporters, Ms. Pelosi singled out members of the cabinet by name, asking why they would not intervene.

while Trump has been locked out of his Twitter and Facebook accounts, some people have the idea that it’s not enough to simply stop him from posting on social media but rather that he should be removed from office as soon as possible, as he is a clear and present danger to society and poses a major threat every minute he remains president.

On Thursday, House Speaker Nancy Pelosi and Senate Minority Leader Chuck Schumer separately called for Vice President Mike Pence and the rest of Trump’s Cabinet to remove him from office via the 25th Amendment.

“What happened at the U.S. Capitol yesterday was an insurrection against the United States, incited by the president,” Schumer said in a statement.

According to reporter Amee Vanderpool, removal by either impeachment or the 25th Amendment is supported by more than 100 lawmakers (and counting). That group includes Republican congressman Adam Kinzinger, who released a video on Twitter calling for Trump to be booted:

As the violent mob incited by President Donald Trump stormed the U.S. Capitol on Wednesday, some West Wing staffers panicked that they were possibly becoming participants in a coup to overthrow the government.

Tonight, there was a sense that the ground had shifted. Even Stephen Miller told one person close to the White House that it was a terrible day.

The provision in the Constitution requires the vice president to secure support from the majority of the Cabinet or Congress. According to a D.C. strategist close to the White House, some prominent Republicans are lobbying Mike Pence to greenlight the process.

“Pence has to initiate it,” the strategist said.

Republicans were doubtful Pence would take the extraordinary step given his longtime fealty to Trump—even in the face of being humiliated.

Maybe if Trump calls for another protest, then it’s possible,” a former West Wing official said.