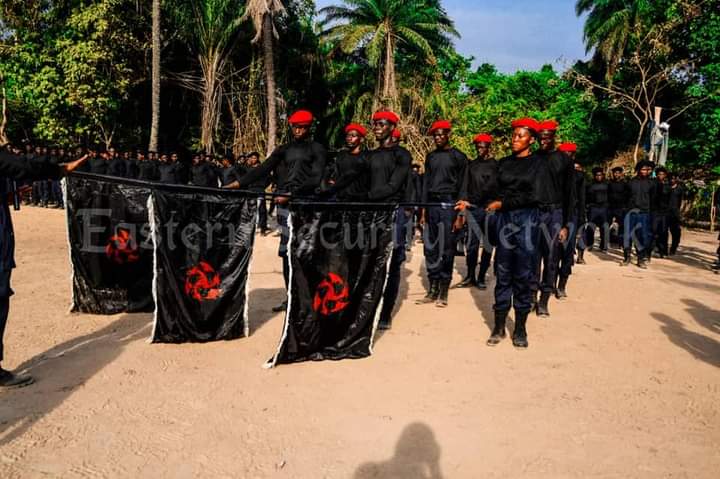 Deceit, lies and warmongering are well-known attributes of Nnamdi Kanu, the leader of the Indigenous People Of Biafra. Kanu who promised the mother of all battles before and after the invasion of his Afaraukwu home in 2017, is still in exile blabbing and hoodwinking his supporters with another none existing Eastern Security Network.

For those Umu Igbo who care to listen and reason with me, Kanu and his proscribed group do not have the legal and political rights to establish any form of Security Network in the Eastern region. IPOB is a proscribed organization. This is one fact Kanu and his legions of thugs must come to agree with.

I wonder if Nnamdi Kanu has advisers! Though, it will be very difficult for Eze Onye Agwalam like Kanu to listen to advise. After all, he is a supreme leader who is above the law.

One thing is sure, the fugitive leader of the Indigenous People Of Biafra cannot usurp constituted authorities in the Eastern region. The elected leaders of the region are the only representatives of the people recognized by the law and not Nnamdi Kanu and his outlawed movement.

From the legal standpoint, Nnamdi Kanu and his marauding thugs lacks the power to form a Security Network because they have been proscribed by the law. Elected leaders of the region are the political class empowered by the law to establish such security Network.

I was thinking Kanu and his cohorts will return back to the court and challenge the kangaroo process that culminated to the proscription of the group as a terrorist organization. But unfortunately, all of them decided to look the other way- pretending as if the proscription is null and void.

Since IPOB was proscribed by Buhari’s administration, security agencies have killed and incarcerated hundreds of IPOB members. Until there is another court injunction upturning the proscription of IPOB, Nnamdi, IPOB and their Eastern Security Network will remain illegal till further notice.

Whereas, Kanu doesn’t speak for the people of the region. He is a non grata in the entire political equation of the East. The problem with Kanu is that, his insatiable quest to maintain parochial relevance has beclouded his common sense from what ought to be.

However, Let’s face the present reality. Kanu has no army to fight Nigeria. Kanu has no diplomatic wand to strike the right button among the power brokers. His noise is as feeble as tissue paper. People are already getting sick and tired of his bogus noise. It is a matter of time before truth and reality will overrun him.

Kalu Nwokoro Idika is a writer and investigative journalist